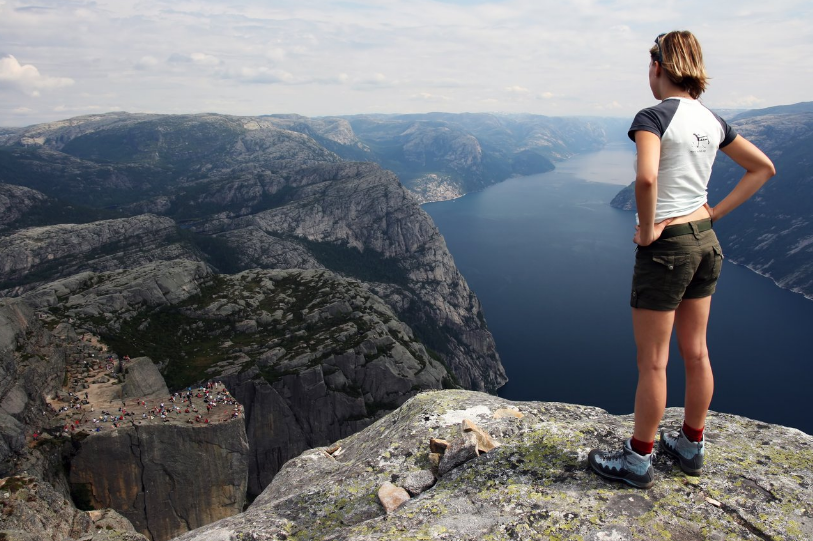 Norway is known for its breathtaking natural beauty. It is surrounded by mountains and has some of the most impressive hiking trails in the world. One of these locations is in Rogaland county called Pulpit Rock, or ‘Preikestolen’, as it’s known in Norwegian. The current name was coined around 1900 and before that it was known as ‘Hyvlatonna’, which translates to mean ‘Planed Tooth’ in English. The name was changed into order to attract tourism and has proved successful. Pulpit Rock now boasts upwards of 200,000 visitors per year, a number that increases annually. 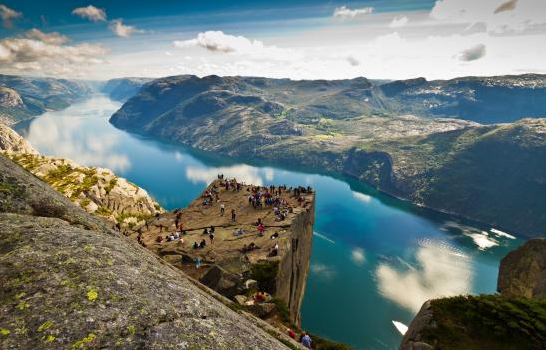 Pulpit Rock is a steep cliff that overlooks the Kjerag plateau, and rises 1,982 feet above ground level. It is only accessible by a 2.4 mile hike. Some parts of the hike are very steep and can be dangerous. The cliff was formed about 10,000 years ago when glaciers reached the edge of the cliff. The water from the glaciers broke off huge chunks of rock when they pushed up against the mountain during the Ice Age and floated away in the water. There is a chance that more rocks will eventually fall as there are deep cracks in the rock, but geologists have claimed that it is safe for now.

The cliff overlooks the valleys of the Ryfylke region, which are green with vegetation and mountains that reach up to 2,766 feet. Some of the hilltops also have blue freshwater lakes, which add to the spectacle.

The location is so popular that it has been featured on television. Cans of compressed air from the region are being sold in China so that people can experience the air from the Ryfylke region even if they never visit it themselves. There have also been statues erected of the cliff, much like a granite sculpture that is located in the town of Langeskov in Denmark. The safety of the trek was improved by a project in 2013 to widen the path to the cliff in order to create easier passage. There are no fences on the trail. This decision was made to protect the natural beauty. Pulpit rock remains one of the most beautiful places on earth, and if you enjoy unbelievable views, we recommend this as one of the foremost places to visit in Norway.